Remember that I said I would sew a bra every month? It seems that I already failed in the second month as I can not show you a bra today. I was on a good way, but then I made a big mistake (more on that later). I cut a second version which is nearly finished. However, yesterday evening I decided to take my time (and unpick and redo the underwire casing) instead of sewing in a rush, being unhappy with the result only to meet a selfimposed (!) deadline. So today I will show you my fitting alterations, and next month I can show you a pretty completed Malborough. Call it cheating, I call it effective stress management 🙂

I have a weird bra size. My measurements put me to a 75AAA, but I need the width of a 75B cup. Most of the fullness is in the lower part of the bust. This means I will always have to do a lot of alterations to fit the cup to my size. I decided that chosing the size according to my measurements would not help me. Rather I looked up what US size corresponds to the European 75B. That is why I started with a 34A.

I made a test cup out of paper towels with a casing for the underwire as I had learned in the lingerie workshop I took in summer. This is such a great method to help fitting the cup, especially in my case. It is a bit difficult, though, to hold the cup with one hand and pin out the excess with the other hand. Here are my different steps: 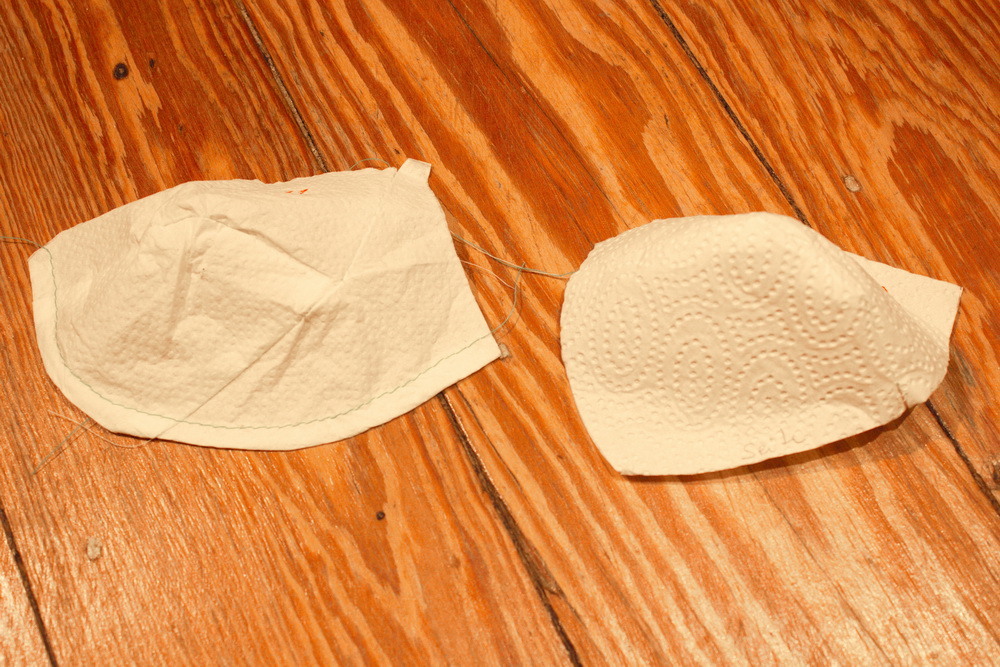 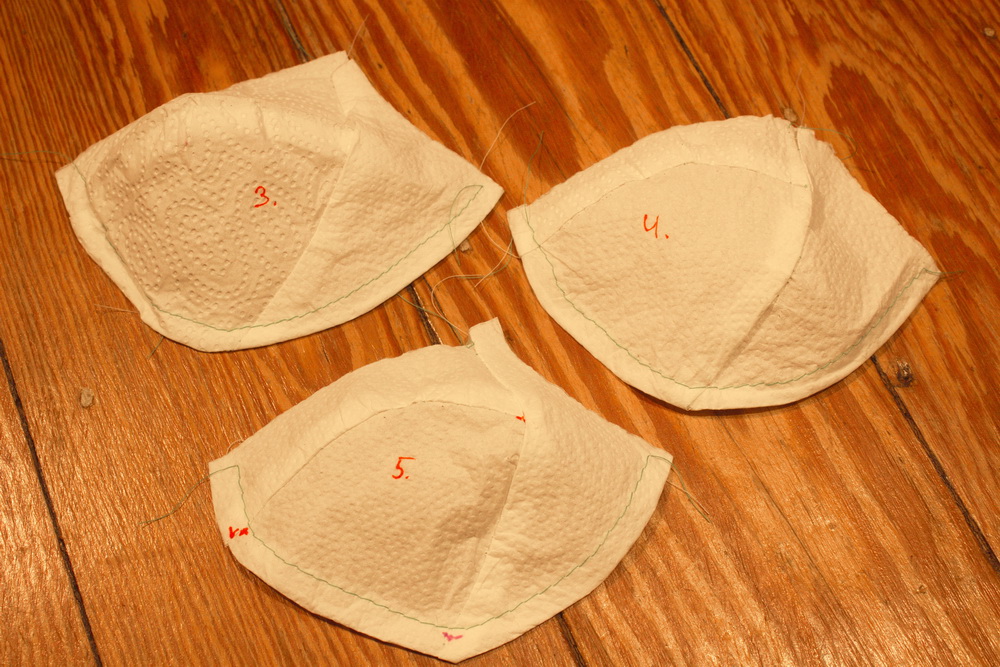 The first cup is the original 34A without alteration. I do not know what happened with the second try….I was sometimes also a bit unsure at which angle the cup would sit in the bra, that is why I had to redo some of the changes again. I needed five tries to get the fit right (imagine I would have sewn five bras…I am sure I would have given up). As this process was all trial-and-error you can see the final changes best in comparison with the original pattern pieces: 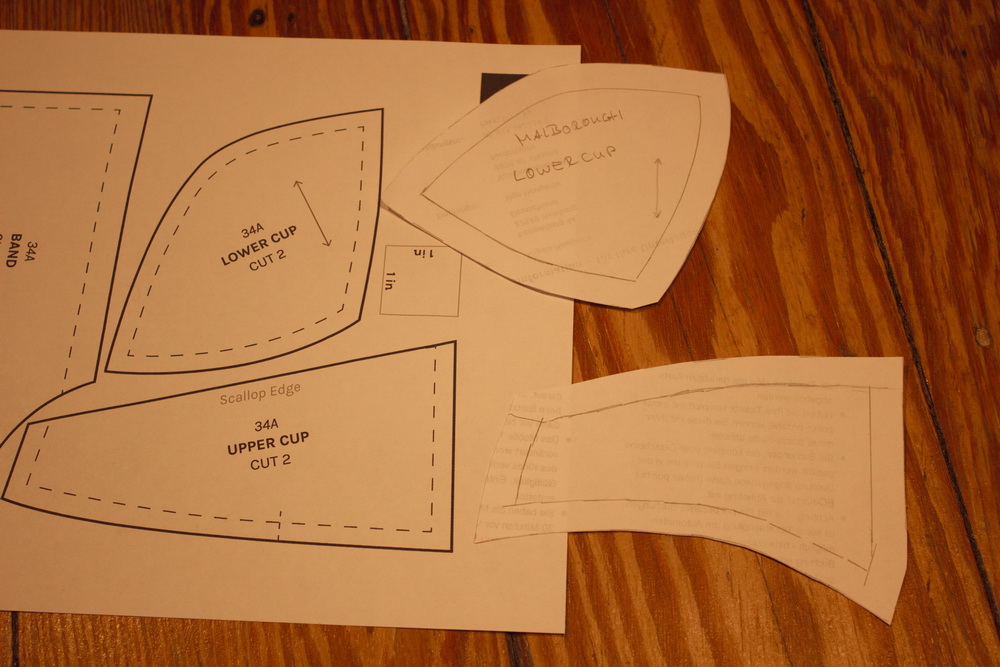 I used some knit scraps to make a first test bra. Everything went well so far, and I even added some lace scraps. 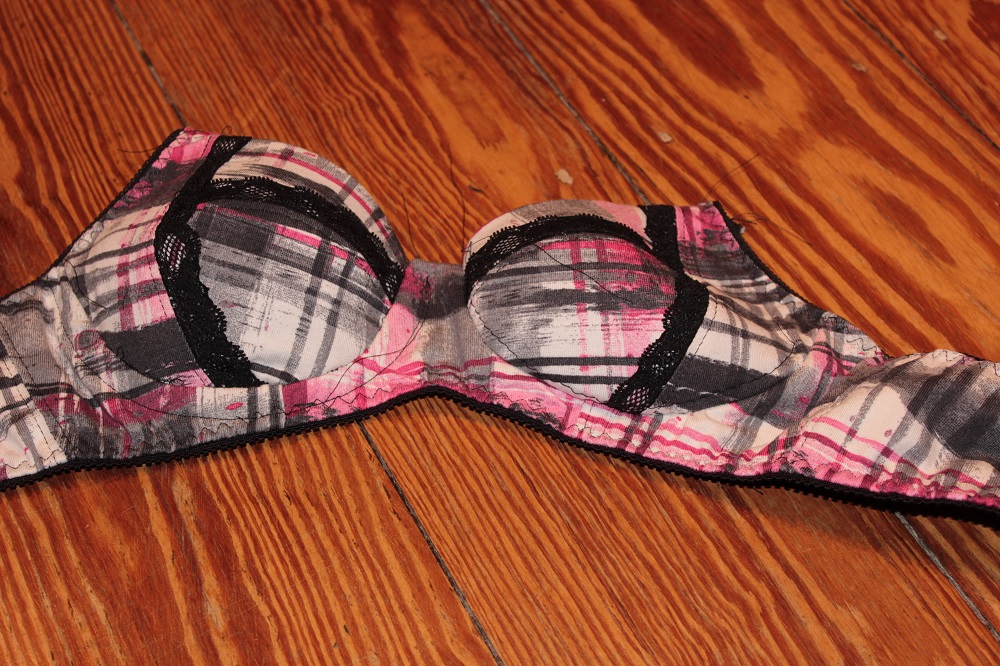 While cutting I forgot to add seam allowance to the bottom edge of the foam. I only noticed this mistake when I wanted to sewn on the casing. You may imagine my frustration: A bra messed up and I would probably not be able to meet my November deadline. 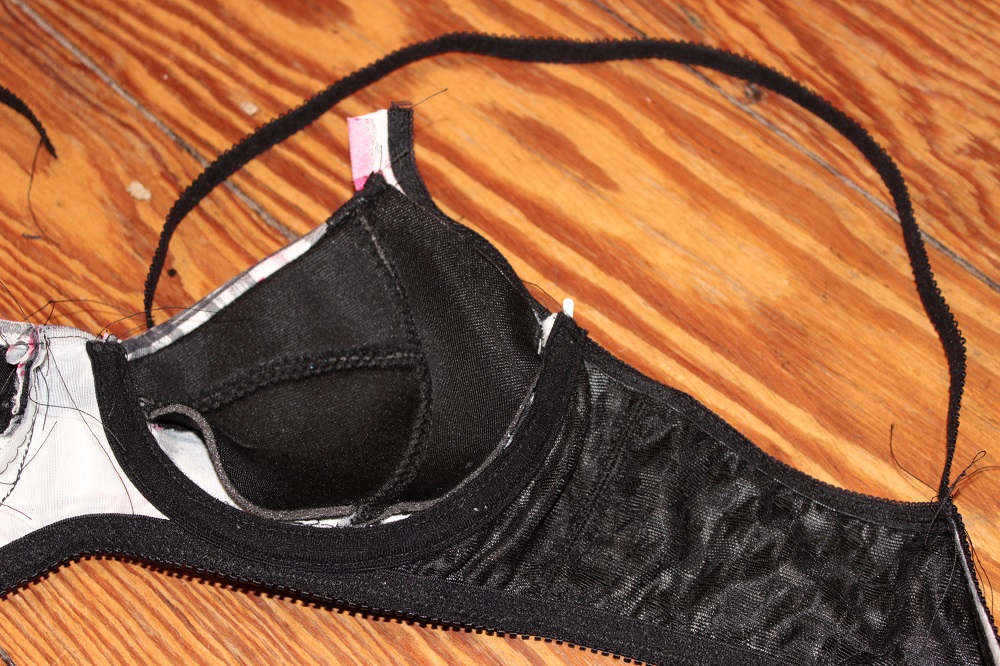 I took a deep breath and basted the straps and closure to the bra so that I could at least try it on and get an idea of the fit. It was quite good, as far as you can say with only one wire and a strap getting loose during the fitting. I noticed that the upper cup had a tendency to press the bust a bit flat. So I slashed the upper cup piece in the middle and spread it open 1 cm to give more width. I compared the length with the BHS10 cup piece, and this was the same.

The Malborough bra is very similar to the BHS10 bra, so I stayed to the construction order I learned. I only had a quick view on the instructions for the Malborough. The main difference is how the casing is sewn on. On the Malborough the casing is hidden under the elastic at the sides and closed in the middle with a bar tack in the end. I learned to close the casing at the end that will lay in the center with a bar tack before it is sewn in, so that the visible bar tack will be at the side. Maybe I will try the “Malborough method” in a future version and decide which I like more.