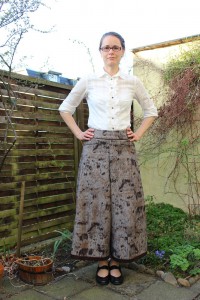 My sewing mojo is back and I have already done some pattern testing and started a summer dress I hope to finish soon, now that summer finally seems to visit us here.

I finished a second version of the Emily culottes already in April. Do you know those projects that  seem to never come to an end? After I had finished my first emily culottes I started this second version right away. For this version I lenghtened the legs and chose the waist tab option of the pattern. I had some ideas how to construct the culottes, but most of how they look now only developed during the process, one decision making other steps necessary.

I love to pair the culottes with my Style Arc Sissy Blouse. Please excuse the wrinkles, the pictures were taken after I came back from work. 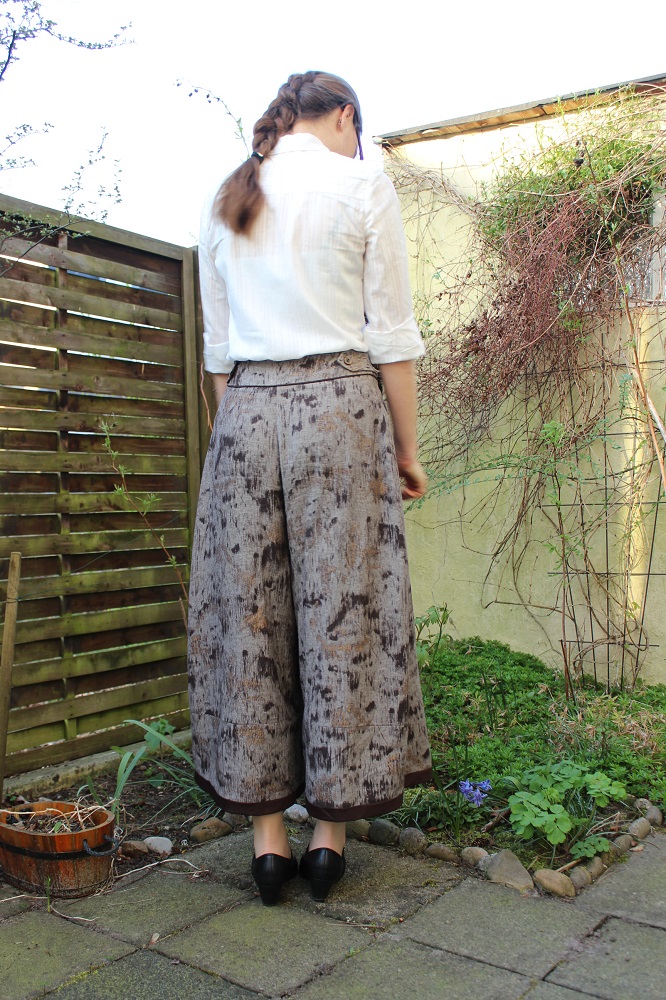 The fabric is some lightweigt printed cotton denim. It has some golden highlights which give a bit of glamour.

Only alteration I did was the same as for my first version: I took out 1 cm at each side in the center back at the bottom of the waist band and the top of the back.

I wanted to make the culottes with longer legs, but I did not have enough fabric to cut the legs as one piece. It was also not enough fabric to try any pattern matching. So I had the idea to add a piping at the lower leg where the fabric pieces met (I had to skip this idea later on though). This led to the idea to add some piping to the welt pockets as well as to the waist band. The culottes are unlined so I opted for a clean finish in the inside with HongKong finish of the seam allowances.

For the welt pockets I had a bit to try how to add the piping. This is not too difficult, but you have to make sure that the piping is caught at the sides. This is the welt with piping laid onto the pocket: 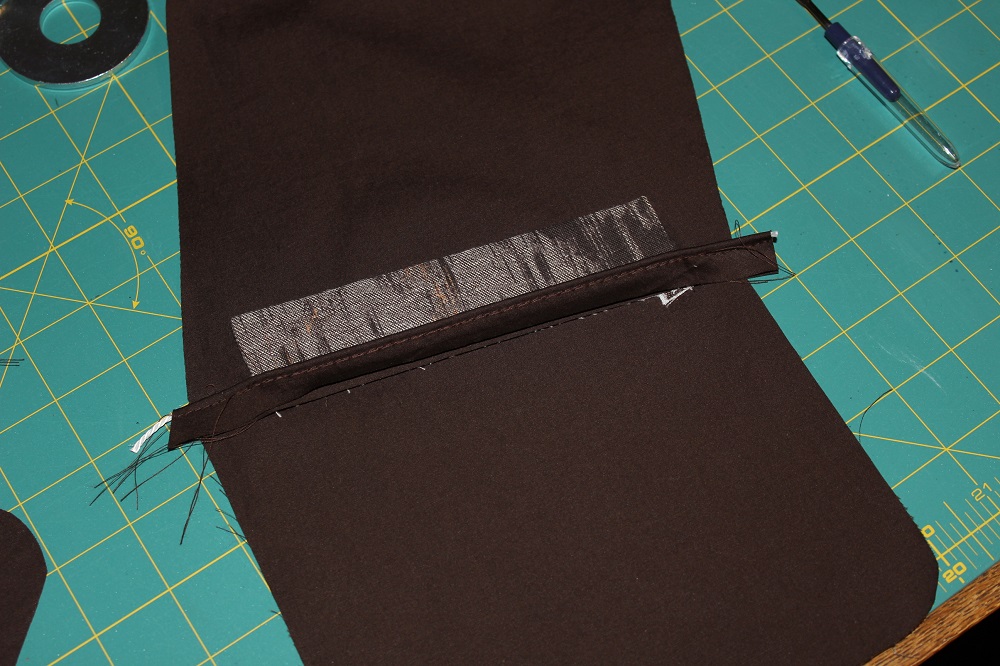 While sewing make sure that the piping is turned back: 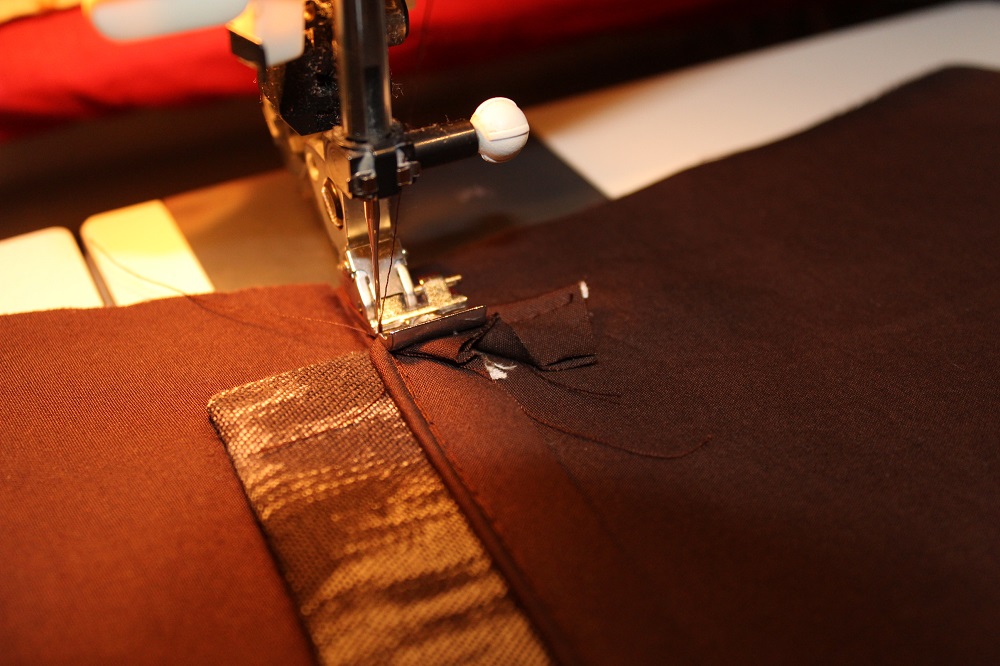 This is how it looks later after sewing the pocket on the pants: 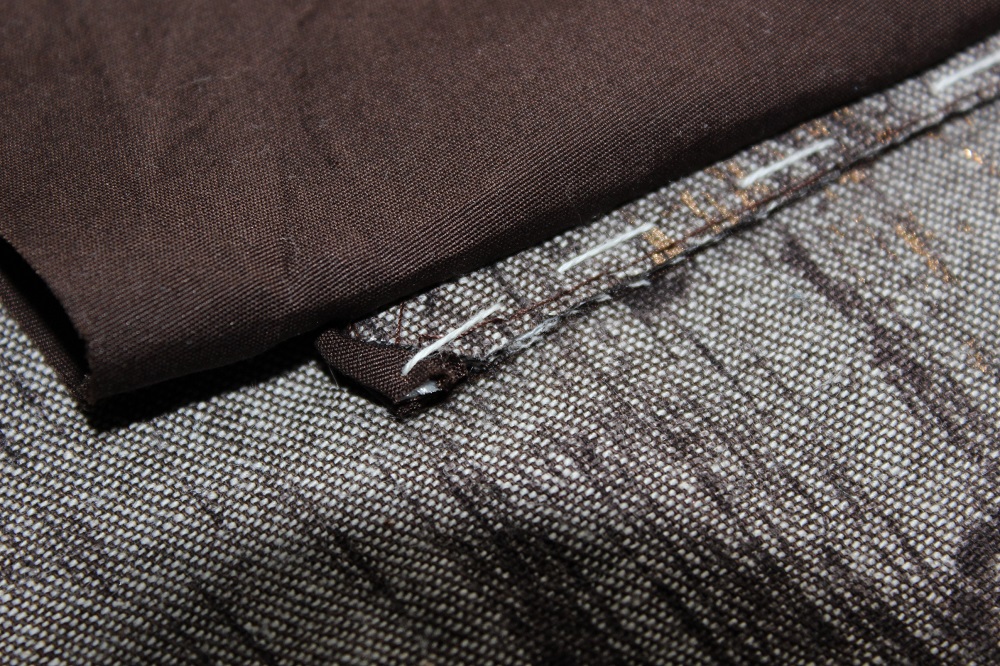 I did not like the mess at the inside with all the interfacing showing. Is there any way to have this look nice and neat? 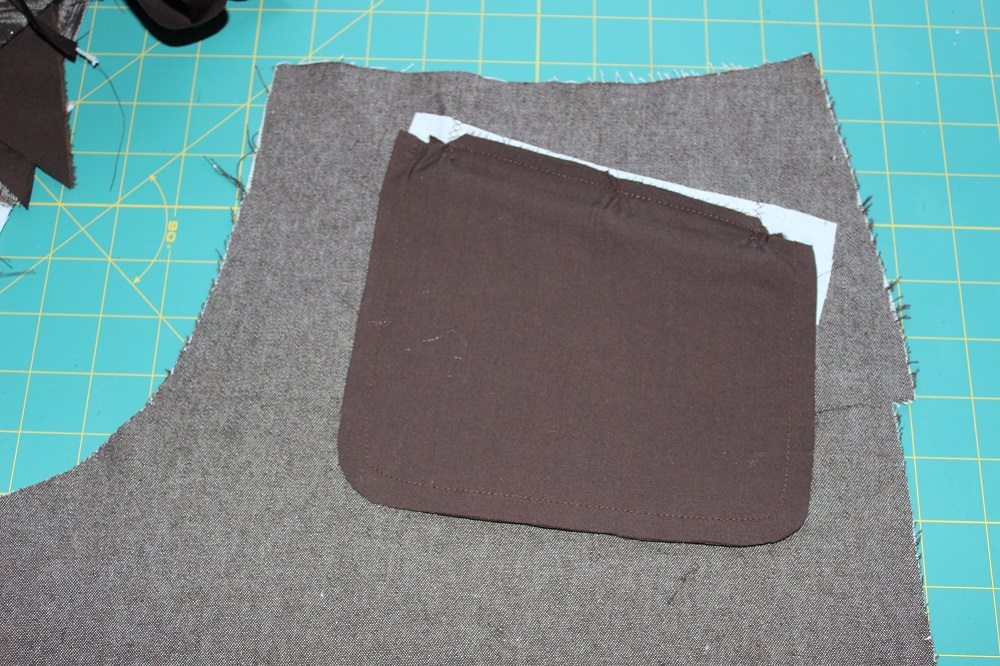 I decided to line the front upper part of the culottes: 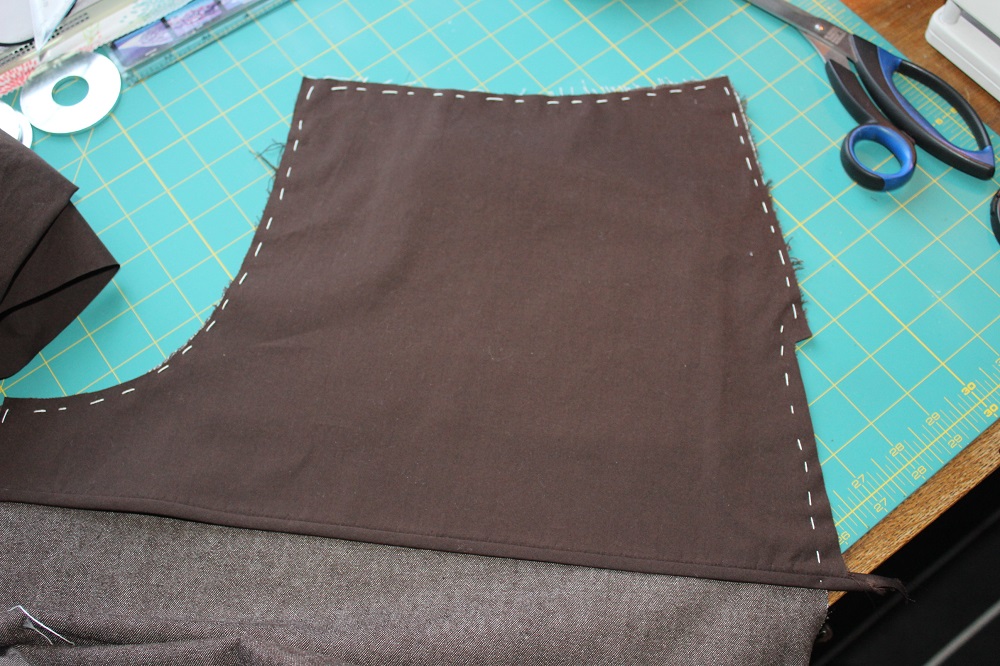 I did skip the piping at the legs where I pieced the fabric together because it added too much stiffness. I did not want to disturb the drape of the fabric. I got a bit paranoid about this, so I also skipped the HongKong finish for this seam. This is now the only seam that is finished with the serger. To add some interest and also to avoid a stiff hem I finished the bottom of the legs with a wide bias tape. At the inside the tape is sewn on by hand.

One button of the waist tabs is functional, and I decided to sew a tiny bound button hole. I am really proud of this, it is so cute.

Here are some pictures of the inside. I also finished the zipper tape with bias binding. 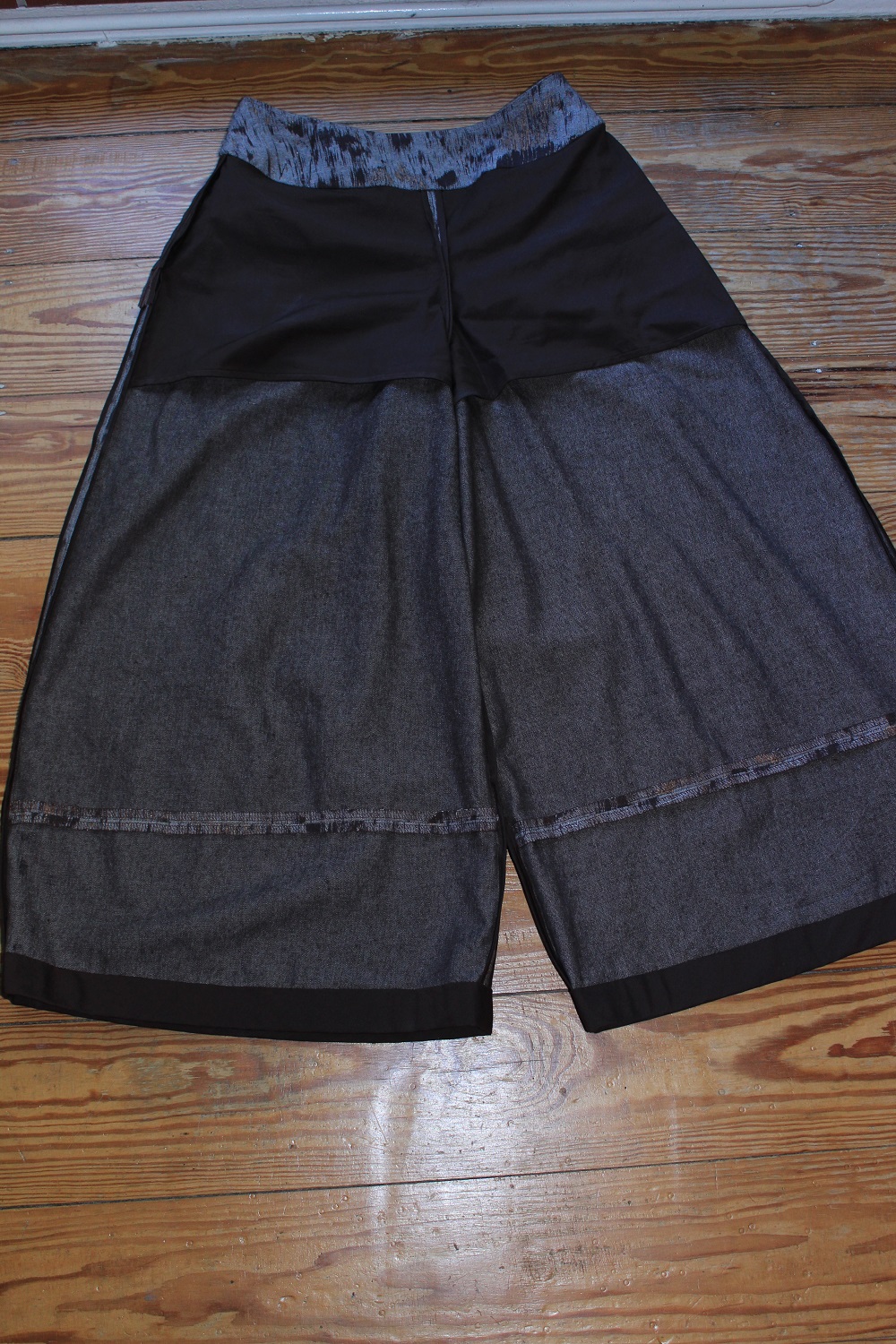 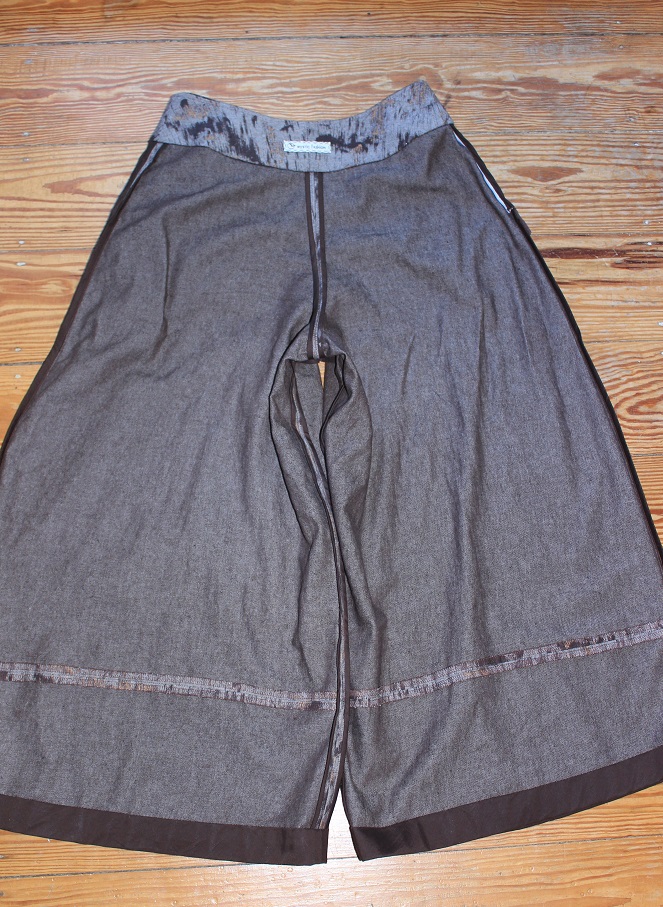 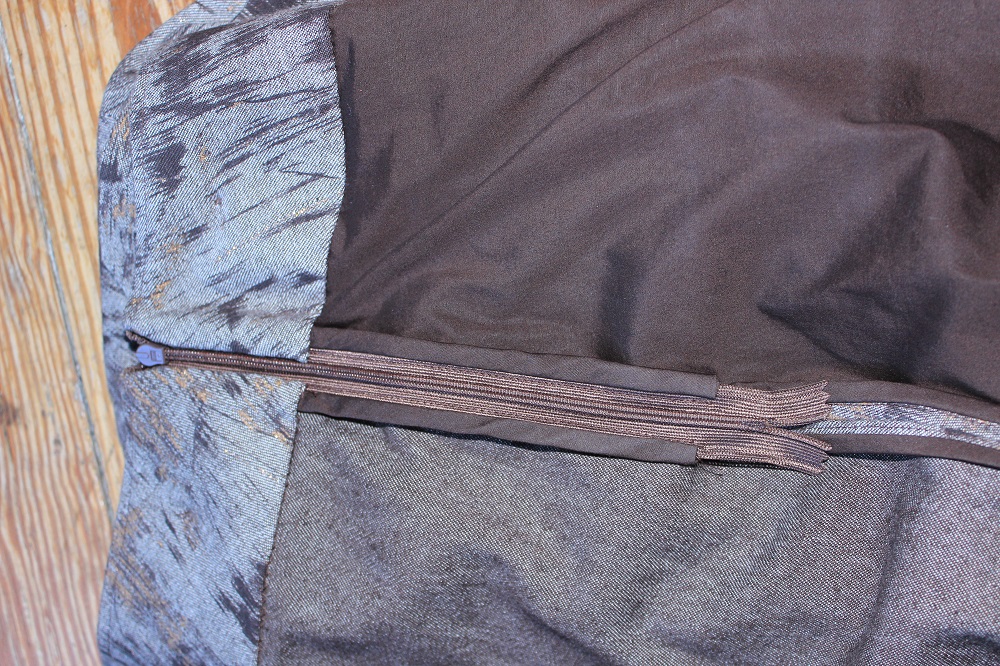 I wear the culottes on a regular basis. They are very comfy and great for cycling. 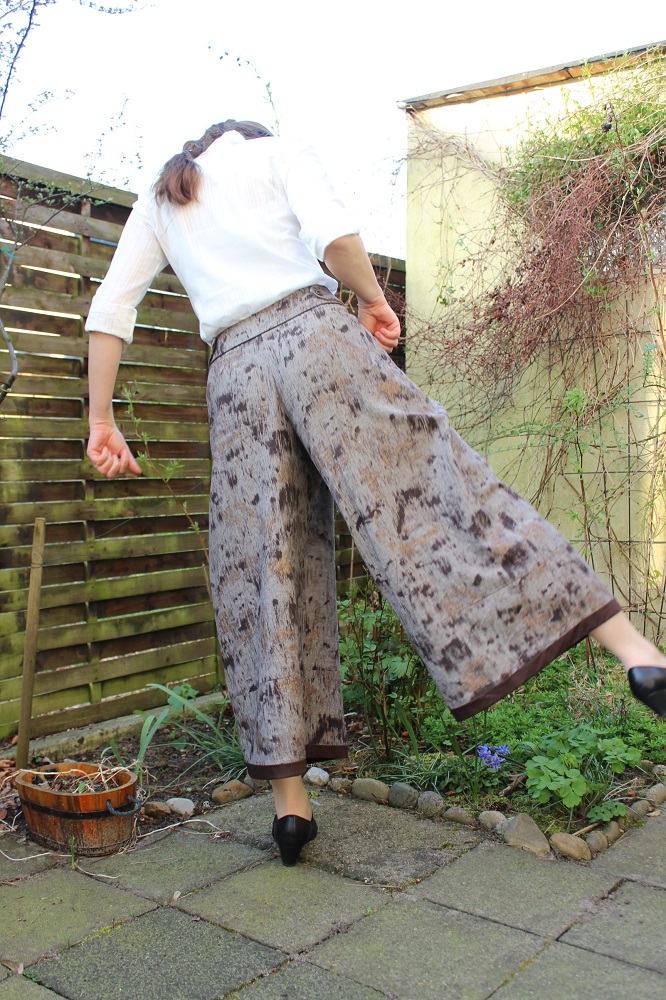