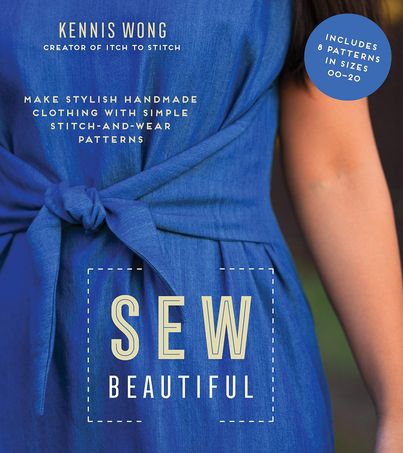 If you have been following my blog for a while, you know that I have tested a lot for Itch to Stitch. Now Kennis has published a whole book: Sew Beautiful. The book is aimed at sewing beginners. As typical for such books it consists of two parts: in the first part general sewing techniques are described, in the second part concrete projects are presented and sewn. In total there are 8 different patterns, each of which can be sewn again in different variations.

I sewed three patterns: Palermo Dress, Castlepoint Skirt and Orosi Top. The latter one I sewed only recently, after the book was finished, for the other two I was already involved in the test phase at the end of last year.

The Castlepoint Skirt is a simple, unlined skirt with an elastic band at the back, so there is no zipper. There are pockets in the side seam. Since I need one size more for the hip than for the waist, I have a lot of fabric in the back when gathered by the elastic band, I don’t like that too much. I had found the fabric in my stash, something cord-like that had been lying there for years. It was just enough for the skirt.

The Palermo dress has raglan sleeves and a two tier skirt. The top has a straight cut and is only shaped by the tie band. Neckline and cuffs have an elastic band. I used different silk fabrics for this dress, which have been lying around for ages and for which I had not found any use before. The top is underlined with a thin cotton batiste, so it is not too sheer.

The Orosi top is a simple shirt with shawl collar or V-neck and attached peplum. I lengthened the top by 2cm: generally the waist is often too high for me and I wanted to lower the pleplum a bit. I like it very much like this. The flounce is gathered with elastic, I have never done this before, but it worked great and the gathering is very even. The fabric is a viscose jersey. I like the shawl collar very much, I will definitely use it again.

Disclaimer: I have received the patterns free of charge

No comments yet
Itch to Stitch Schnittmuster Test